Corilla Plastics > What we’ve done > From design to asse… 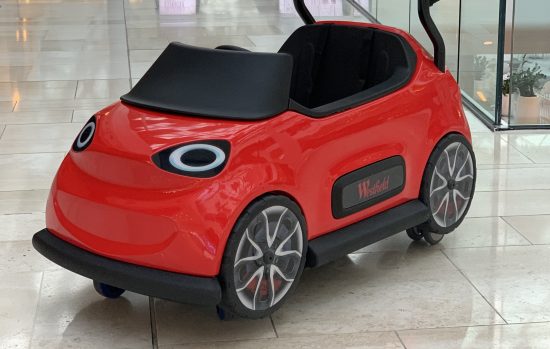 Ride Tech Ltd is a specialist entertainment company which supplies a wide range of shopping-centre rides, from static experiences to mobile cars. One of Ride Tech’s most recent projects has been a stroller-alternative in the form of a push-along car which makes shopping fun for children while giving parents enough storage space to transport their groceries.

Building on an existing relationship with Corilla Plastics’, Ride Tech reached out to the South Wales-based rotational moulding company for support in bringing the new product to market.

Ride Tech’s push-along car needed to be light and manoeuvrable, but sturdy enough to stand the test of time – even if it took a few bumps along the way. It was also essential that any plastic components could be easily assembled alongside a selection of non-plastic elements.

Cost was also a factor, as Ride Tech was looking to ensure its short initial run of 130 cars remained viable on a per-unit basis.

Working in tandem with a specialist model-maker, Corilla Plastics demonstrated how most of the push-along car could be manufactured through rotational moulding, thus taking advantage of the inherent dimensional stability of roto-moulded plastic.

Members of the Ride Tech team joined Corilla Plastics on-site to help manage quality control and assembly of the first few units. It was essential that potential flaws were identified as early as possible, so that the Corilla Plastics team could test for them once the full product run moved to the full manufacturing phase.

Craig Beswick, Managing Director of Ride Tech Ltd, commented: “Working with Corilla Plastics to create these push-along cars was a brilliant experience throughout. The team took an active and enthusiastic role as early as the product development stage, and remained committed all the way through to the assembly of each car.

“We also benefited hugely from Corilla Plastics’ flexibility during the project. It may not be conventional for a manufacturer to welcome members of the client’s team on-site for a prolonged period of time, but Corilla Plastics was completely accommodating and it enabled us to contribute towards quality control and assembly – ultimately giving us absolute confidence in the final product.”

Ride Tech’s push-along cars have now been deployed in shopping centres across London and Stratford with resounding success. To learn more, or to discuss your own project enquiry, get in touch with our team today: https://corillaplastics.co.uk/contact-2/