Corilla Plastics have been manufacturing custom made plastic products using the rotational moulding process for many years. One of the most consistent applications for this type of process is for manufacture of diesel fuel tanks.

Les Loosemore, New Projects Manager with Corilla Plastics, has been involved in the design, testing and production of fuel tanks for a host of vehicle manufacturers including Fiat, Iveco, LDV, JCB, Caterpillar and Land Rover. We asked Les to share some of his expertise.

Why use rotomoulding to manufacture fuel tanks – isn’t steel cheaper?

Les: “There are a number of advantages that plastic moulded tanks have over metal tanks. The key advantage is the flexibility that you have in terms of using the available space. The process allows you to create a mould to fit almost any ‘envelope area’ within the vehicle – i.e. the space that will contain the tank. With metal, while it will be possible to make complex shapes, it is unlikely be economically viable.”

“That’s not to say that plastic tanks are right in every situation, but where a complex shape is required, rotational moulding offers a cost effective manufacturing solution for annual quantities from 150 to 15,000.”

Aren’t most fuel tanks a fairly regular shape though, why is there a need for a complex shape?

Les: “Largely speaking that’s true for the automotive industry, including a lot of trucks and vans. However, the tanks we manufacture are not for mass production vehicles, but more for the industrial, low volume vehicles, such as tractors, diggers and construction vehicles where maximum fuel capacity is paramount”.

“In this kind of vehicle, complexity of shape is a very common occurrence. First of all, the vehicles themselves tend to be odd shapes – compare a Ford Fiesta to a JCB to see what I mean. But more importantly, these are work vehicles, so any down-time is a potential issue and that means the vehicles need to be able to carry as much fuel as possible.

“The last thing you want to worry about if you’re ploughing up fields is running out of fuel and having to go back to the farm to fill up with diesel. You’ll waste a huge amount of time. So for these vehicles, creating a fuel tank with a complex shape that maximises capacity is a real plus point, and for manufacturers, a real selling point. This is also true for off-road construction vehicles where time equals money”.

So the key to a good tank is making it as large as possible? 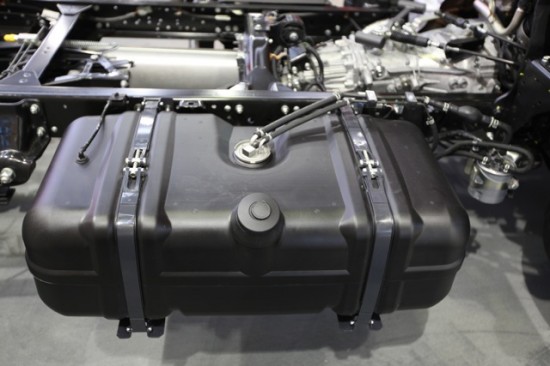 Les: “That’s certainly a priority but not the be all and end all. We also need to consider fuel management – in other words, how fuel gets to the tank and from the tank to the engine”.

“For example is there a filler neck and if so, how remote is it from the tank? And does that then mean a separate flexible hose, a separate moulded tube or can the tube and tank be moulded as one piece.

“In terms of cost, the likelihood is that if the tank can be designed and moulded in one piece, it will be more cost effective because you’re removing additional components that need to be bought and fitted. So we’d work with the designers to assess the location of the tank and do our best to design any components out of the finished article.”

“If we determine that a one piece tank and filler just isn’t feasible then we would work to find an appropriate solution, which might be as simple as on off-the-shelf length of rubber hose. It’s about finding the best solution at the design stage which is why working in partnership with the customer is critical.”

Are there any other considerations?

Les: “Absolutely – there are plenty of other potential components to consider. Does the tank need a sender unit, feed and return fuel pipes, drain-off point or a roll over valve?

“It’s important to remember that we’re not fuel tank designers. We are specialists in moulding plastic shapes. But having worked on a lot of fuel tank projects, we understand exactly where parts can or can’t be included in a fuel tank and whether that will lead to a successful product, fit for purpose, and compliant with all the relevant safety requirements.”

Of course, safety must be a big factor?

Les: “When it comes to vehicle design, safety is paramount. As you would imagine, there is incredibly strict legislation involved in verification and certification for vehicles to be used on a public highway.

“In the UK this is managed by the Vehicle Certification Authority and for fuel tanks manufactured from a plastic material, the critical regulation is EC34 Annex 5. As you’d expect, it’s far from straightforward, after all, you’re driving around carrying a large volume of flammable, explosive liquid so it has got to be contained safely.”

How do they determine whether a plastic tank is fit for the road?

Les: “The testing process for a new vehicle is incredibly tough. There are mechanical, permeability, temperature and fire tests designed to simulate potential real life scenarios.

“Tanks will be tested at temperatures down to -40°C and up to 98°C and a range of temperatures in between. After being exposed to these extremes for a set period, the tank will then be put through pressure and impact tests, for example being hit by a measured force in a number of likely weak spots or being subjected to pressure for several hours.

“Perhaps the most spectacular is the fire test which involves the tank being exposed to a pan of raging petroleum coming through specifically designed firebricks to intensify the effect of the naked flame. The tank has to be capable of securely containing diesel during the test for 90 seconds. This test will be applied to a minimum of five fuel tanks to achieve the necessary pass.

“Without a really good understanding of what the tests consist of and how moulded plastic is likely to behave, the process of getting a new vehicle certified can be a minefield.

“At Corilla we understand both aspects and we know that it has been a real benefit to our customers as we’ve helped them to ensure their tanks pass the necessary tests. After all, at a cost for the EC34 Annex 5 test programme of upwards of £25,000 it’s not something you want to do more than once!”

May 17, 2016Fuel tanks, productsPaul Wilson
← Previous Entry: Corilla – getting anything from A to B! Next Entry: Advances in Rotational Moulding →